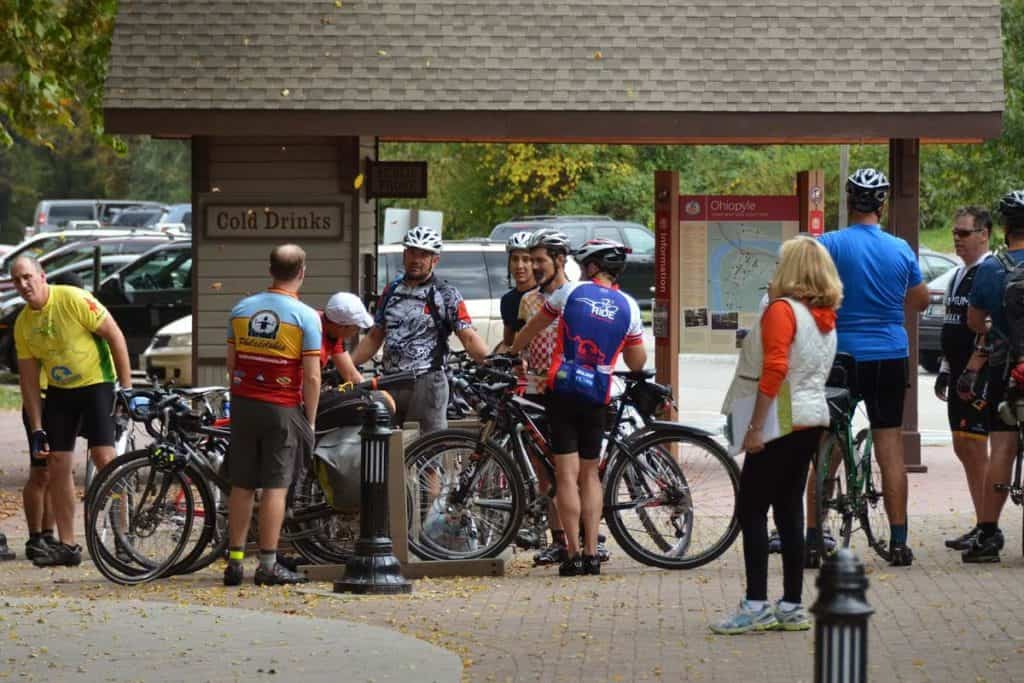 (1) McKeesport (Day 1 mile 10) : a. The Bottoms and the Brick Alley locations down by the river were known for their late evening activities, a former town Mayor was quoted, “if you had enough cash you were guaranteed to get lucky”
b. Harmony Society, a Christian communal industrial society, settled here in 1804 generated bundles of cash but later dissolved because its members were celibate.

(3) West Newton (Day 1 mile 27): a. At one time had a large paper mill and at least 2 mines. b. Sites to see on the trail include a reconstructed Railway Station, an old passenger car and Gob Piles (The results from slate being dumped along with whatever coal that escaped the coal cleaning process.)

(5) Pittsburgh Coal Seam (Day 1 mile 47): a. The seam outcrop can be seen from the trail. It helped fuel the Industrial Revolution in Pittsburgh. b. “The Pittsburgh coal bed in the four states of Pennsylvania, Ohio, Maryland, and West Virginia has produced an output that, at mine prices, represents a greater value than any other single material deposit that the world has yielded” The Pittsburgh Coal Bed – Its Early History and Development, Howard N. Eavenson, 1938.

(6) Broadford Junction (Day 1 mile 49) The yellow brick buildings and chimney seen across the river belong to the Overholt Distillery, makers of Old Overholt rye whiskey (Sometimes referred to as “Old Overcoat” from the way you felt the morning after you drank it.)

(7) Connellsville (Day 1 mile 51): a. Henry Clay Frick (1849-1919) was arguably the richest (and often the most hated) man to ever come out of the Yough Valley. His Maternal Grandfather was a well-to-do Mennonite farmer, businessman, and “Old Overholt” distiller while his father was a ne’er-do-well from Ohio who knocked up Frick’s mother and had to marry her. Young Clay was a frail but hardworking kid who started clerking in a store at age 14. At 17 he started working at the family distillery which he later traded to get into the “Coke” beehive business (a process for creating a cleaner form of coal). He proceeded to buy up much of the coal property around Connellsville. He made his 1st million by the time he was 30. He was also known for setting up the “Company Store” and later went into partnership with Andrew Carnegie. They had falling out in 1900 after which Frick called Carnegie a “God damned thief”. Before Frick died Carnegie sent a mutual friend to ask if Frick would shake his hand one last time. Martha Sanger relates that Frick told the friend he would “see Carnegie in Hell which is where they are both going.” b. Millionaires Row can be found on Pittsburgh Street which has many Churches, Mansions, and the Carnegie Library. (Mostly built on Coal money.)

(8) Ohiopyle (Day 1 mile 72): a. Native American name for “white frothy water” b. Note that the “High” and “Low” bridges which are approximately 0.5 miles apart are crossing the same Youghiogheny River which passes under in the shape of a 2 mile U-turn (has excellent white water rafting). 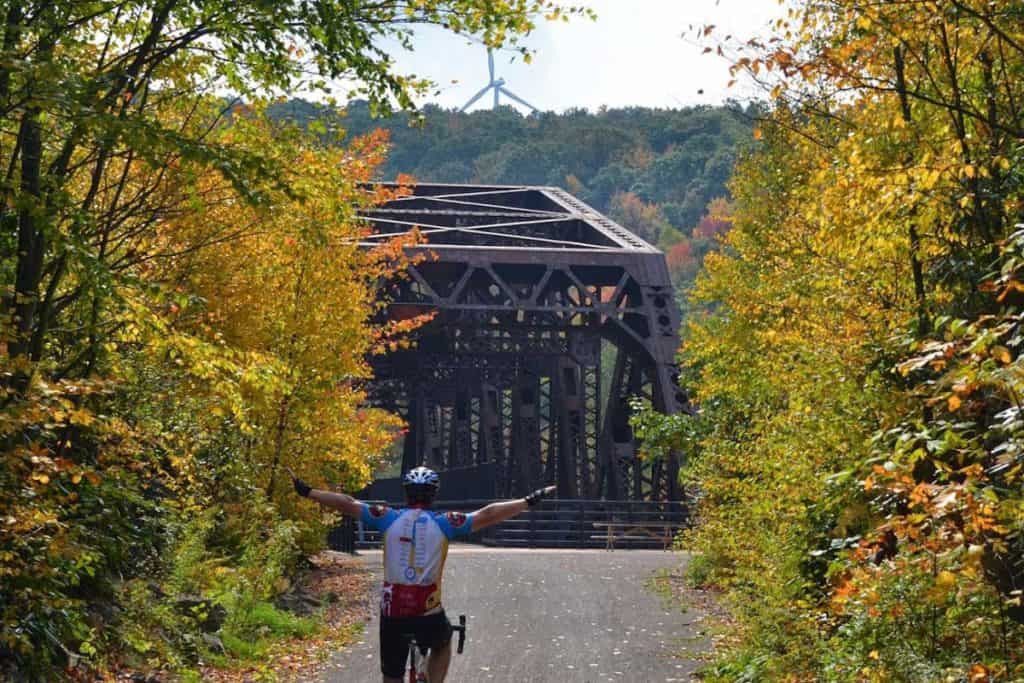 (9) Confluence (Day 2 mile 11): a. Was named for the joining of the Yough and Casselman Rivers and Laurel Hill Creek. b. In George Washington’s time it was called “Turkey Foot”.

(10) Decorative Water Sprout (Day 2 mile 28) was put up by Sanner family and uses water from a spring in the hill. (Don’t drink the water.)

(11) Rockwood (Day 2 mile 29): Maynard is the most important thing about Rockwood.

(12) Wind Farms (mile 109): The Green Mountain Wind Farm was opened in 2000. They sell power to Vermont. The whole farm (8 Windmills) can supply power to about 2,500 homes. They have been built on top of former coal strip mines.

(13) Meyersdale (Day 2 mile 39): Named when Meyers Mill and Dale City combined. a. The Meyers family cemetery is near the south end of the Viaduct. b. Salisbury Viaduct crosses an abandoned trolley line, the route 219 bypass, the CSX (old B&O) main line, the Casselman River (the 5th time today), old Route 219 and a country road. c. The Meyersdale Train Station is the biggest on the Western Maryland Railroad (WMR) line (As promised by the WMR to get the rail through the town).

(14) Eastern Continental Divide (Day 2 Mile 48) at an altitude of 2,392 ft marks the highest point of the passage. (Your remaining ride for the day is all downhill.)

(15) Big Savage Tunnel (Day 2 Mile 50) is 3,294 ft long. The tunnel includes lights but that is not the case with the following two smaller tunnels.

(16) Western Maryland Scenic Railroad (Day 2 Mile 56) is operation and is adjacent to the trail all of the way into Cumberland.

(17) Cumberland Maryland (Day 2 Mile 72): a. Named for William Augustus, Duke of Cumberland popularly known as the “the butcher of Culloden” for the atrocities committed by his troops in the course of suppressing a Jacobite uprising in Scotland. The Duke was to dishonor himself in battle on the European continent two years later, leading to his dismissal. b. In its heyday it was the second largest city in Maryland after Baltimore and called itself the Queen City. c. The Canal would not get to Cumberland till 8 years after the railroad. 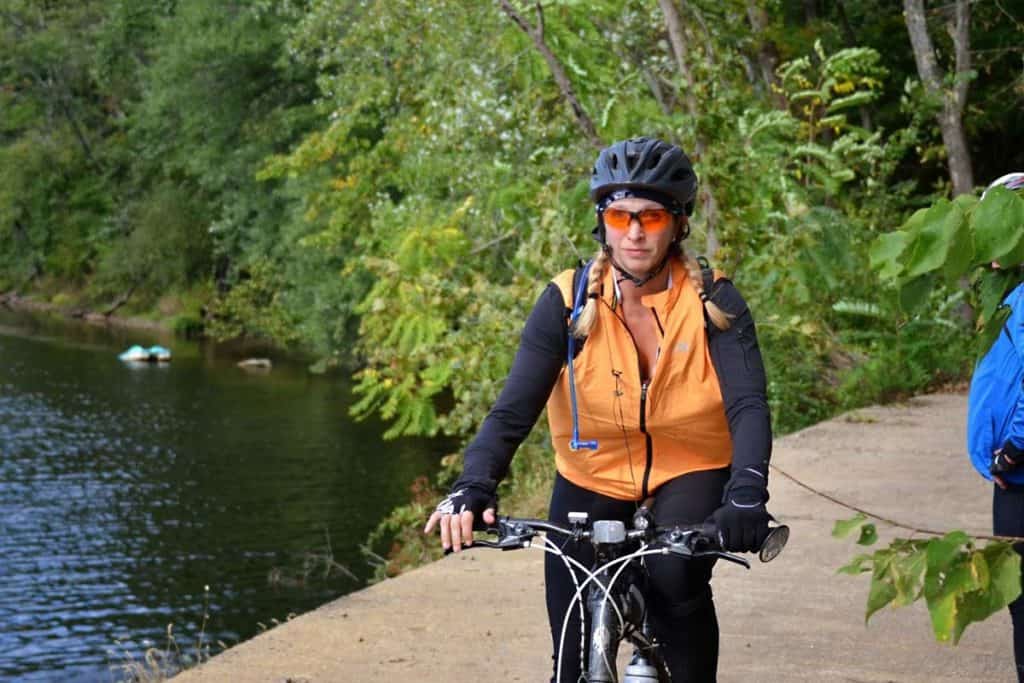 (18) Paw Paw Tunnel: (Day 3 Canal Mile Marker (CMM) 156): Named after the nearby town in WV. The construction was expected to save about 5 miles of additional canal with an expected completion time of 18 months. Actual construction took over 12 years and nearly bankrupted the canal company.

(19) Fort Frederick (Day 3 CMM 112 just off the canal about .25 miles): Built in 1759 during the French and Indian war is the only surviving stone fort from that period. Named for Lord Frederick Calvert.

(20) The hill at Middlekauff’s Dam and The Fighting Irish (Day 3 CMM 106 just off the canal about .10 miles): Site of the canal’s worst labor riot which was caused by the hard-drinking Irish immigrants (the backbone of workforce) who had already acquired a nasty reputation for settling disputes with clubs and guns. In January 1934, several Irishmen died in a notable battle near dam no. 5 between 300 workers from County Cork and 700 “Fardowners” from County Longsford. 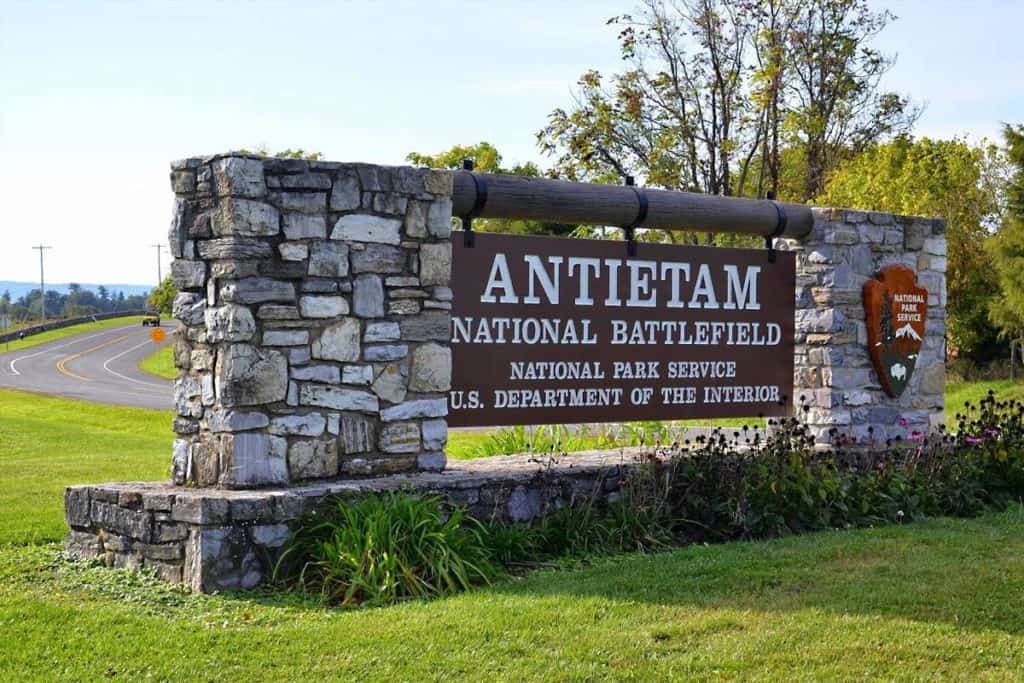 (22) Antietam (Day 4 on Sharpsburg Pike): Is the site of Bloodiest Day of Civil War (23,000 died). a. Many of Sharpsburg citizens hid in caves along the C&O canal during the Battle of Antietam b. Maryland Civil War note: While 62,000 Marylanders fought for the Union army 22,000 fought for the Confederates. In Montgomery County along the Potomac (and neighboring Virginia) the percentage fighting for the Confederates was even higher.

(23) Harpers Ferry (Day 4 CMM 61): Sits at the juncture of the Potomac and Shenandoah rivers. a. It’s famous for its military armory, which was seized by John Brown and taken back by U.S. Marines under the command of Robert E. Lee. John Brown was captured and executed as was John Cook the canal lock keeper. (Making Cook the only canal lock keeper ever hung for treason.) b. The town also experienced many raids and hostile occupations during the civil war from which it never really recovered.

(24) Brunswick (Day 4 CMM 55): Since 1890, Brunswick has been first and foremost a railroad town. Which it celebrates annually with “Railroad Days” the first weekend in October each year.

(25) Point of Rocks (Day 4 CMM 48): This small town was named for the outcrop of rocks that jut out nearly in the Potomac River and helped the canal stay in business. Due to this rock outcrop, the rail road could not get past Point of Rock until after the civil war. Until then the only the Canal could carry coal directly to Georgetown.

(26) Monocacy Aqueduct (Day 4 CMM 42): At one time the jewel of the canal, the seven arches of the 560-foot aqueduct are now corseted with steel beams. Unlike the predominant sandstone and limestone structures along this part of the canal, it was constructed of pink quartzite quarried from nearby Sugarloaf Mountain and brought down to the canal on a small railroad built for that purpose. (This same pink quartzite was also used in the Smithsonian Castle in Washington DC.)

(27) White Ferry (Day 4 CMM 35): The ferry was named after a Confederate Officer who first gained official notice in the battle of Balls Bluff. 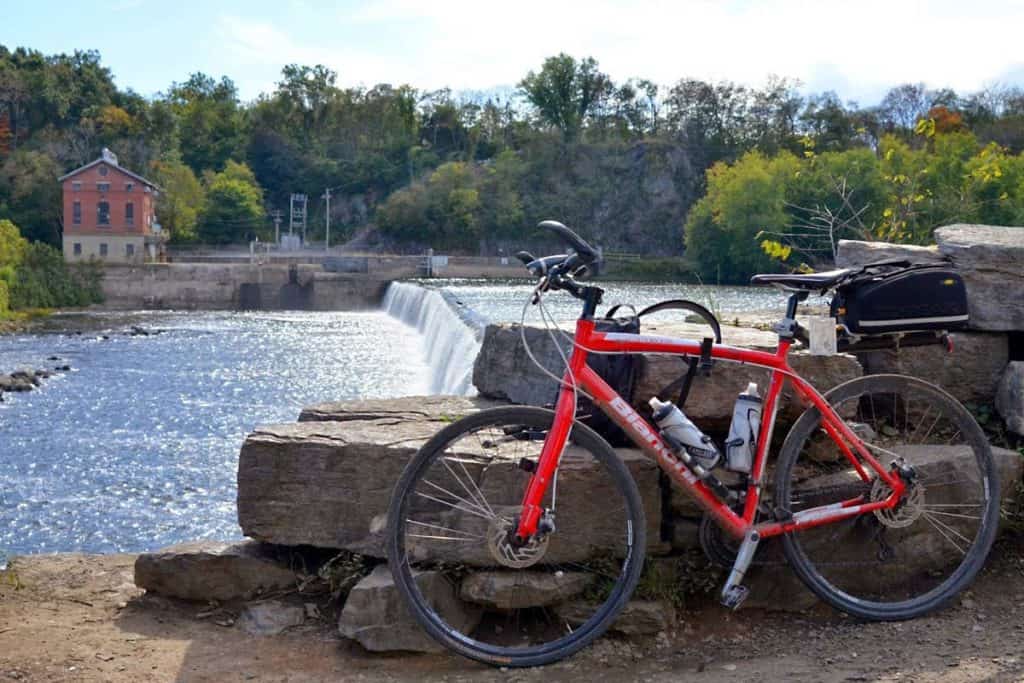 by Bill Metzger and Mike High

From the “The Great Allegheny Passage Companion” by Bill Metzger

From the “The C&O Canal Companion” by Mike High